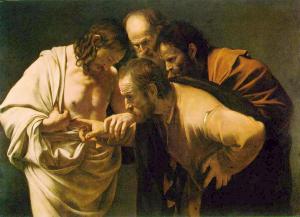 Delivered to Church for the Highlands
Second Sunday of Easter, April 12, 2015

When you hear or think about the disciples of Jesus, which one tends to come to mind the most?  I think the top answer for most of us would be Peter, especially during this time of the Christian year.  And I think he would like that, based on what we know about his ego an Alpha dog personality.  He would be at the top of our list because we probably see a lot of ourselves in Peter.  We know what its like to be close to Jesus and, truth be told, we know what its like to betray him.  There is another disciple, though, that may come to mind. He is Thomas, the one called Twin, the chief doubter of the bunch, which may be the reason he doesn’t make the top of our list of disciples.  He is not as popular in the gospels as Peter, but we may actually be more like him than we care to admit.  And, in light of our Gospel reading this morning, we may wish we were him.

John’s account of the resurrected Jesus entering into the room with the disciples helps us get a feel for what it would have been like to see him.  If we truly spend some time in this text, placing ourselves there with these grieving and frightened followers, we can begin to imagine what it must have been like to encounter Jesus in the way they did.  They have locked themselves in a room.  John tells us it was because they were afraid of “the Jews,” a remark revealing internal tensions between the church and synagogue  as he wrote this decades after the event, words that have unfortunately been used to shape much of the anti-semitism in church history and the world.  These disciples were “the Jews”, just like Jesus was a Jew.  John was a Jew as well. Based on the other gospel accounts and what we know about history, it is more likely that the disciples were hiding from Roman soldiers, whom the disciples feared would be after them like they were with Jesus.  Based on my experiences with grief, I am also thinking the greater reason they were in that room is that they didn’t know where else to go or what else to do. Their world had been turned upside down by the crucifixion and, even more, by the report of the empty tomb.  Getting away to a room with a door that locks is sometimes the best therapy for the darkness of grief.

Thomas obviously had his own way of dealing with grief, as he is not with the other disciples when Jesus suddenly stands in their midst.  He misses the whole encounter they had with him.  When they told him what he missed, he didn’t believe it.  I think I know what was going through his mind when he heard about it from them.  I’ve been there, in that place of doubt and cynicism before.  Haven’t you?  He must have thought they were all delusional, drunk, or playing some cruel joke on him. What we do know is that he didn’t believe them.  And he told them how he wouldn’t believe any of their story unless he had real evidence, like seeing what he last saw of Jesus—hands with nails and a slit in his side.  He must have felt like the only realistic and sane one in the group.

It wouldn’t be but a week later that his sense of rational superiority over the other disciples would crumble as Jesus appeared to the disciples in the room again.  This time, Thomas was there, with his grief, doubts, and with very few words.  I’m thinking the disciples were amazed again, but now chuckling a bit to each other at how Jesus was headed for Thomas this time, inviting him to put his doubts aside and to do what he said he would need to do to believe.  “Put your finger here and see my hands. Reach out your hand and put it in my side” he said to Thomas.  And so he did.  Then all he could say is, “My Lord and my God!”

Have you ever had one of those moments when you had nothing but doubts or when you felt like all of those other Jesus followers were delusional and victims of their own wishful thinking about the reality of a risen Jesus?  If you are like me, you’ve judged Thomas for not being so cynical while ignoring the fact that you are more like him than you think. You may find it difficult to believe that there can be life after death, hope in despair, joy in grief, strength in weakness, or light in darkness.  It could be you wonder about the reliability of what other’s have experienced with Jesus or that you believe what they say but are envious that it has happened for you.

I recall times when my faith was determined more by “but” and “unless” than “My Lord and my God!” One such time was while planting a church in the Dallas area some years ago.  It was my second church to start.  The first one i started was a “My Lord and my God!” kind. I had no idea what I was doing and was still fresh from seminary and my first pastorate.  All I could do was fling myself into the hands of God with faith.  My faith grew and I felt the power of partnership with God in how that church was growing in ways I could only attribute to God.  The second church, though, was quite different.  A lot had changed in my life since the first one:  burnout, another church and kind of ministry, my mother’s death after a long battle with cancer, my father-in-law’s battle with cancer and death two year’s later, the birth of two children, and the disappointment and injuries from a good church being overrun with the agenda of a handful of mean-spirited people.  The faith and idealism I had for church and ministry had become jaded by the time of this second plant.  I obviously had enough trust in God to fling myself out there again, but I did so with the “But . . . Unless . . . I will not believe” words of Thomas.  I spoke these words more frequently as the church start went along.

This all changed with a sermon series.  Yes, that’s right, a sermon series can actually change someone, even a preacher! I don’t know what effect it had on anyone else, but it was an eye-opening time for me.  It was a study I began on Jesus’s Sermon on the Mount in Matthew’s gospel, walking through it verse by verse.  I had picked the series because I knew I was familiar with it.  I still knew the Beatitudes I had memorized for a pizza party in Sunday School as a child, had studied it thoroughly in seminary, and had preached on it many times.  After beginning my study this time, though, It didn’t take long for me to see how wrong I was, how much I didn’t know.  I began to encounter a Jesus I thought I knew already. This time, this reading of the account, God was showing me new things, things that challenged me to the core, things that added to my knowledge of Jesus and expanded my understanding of what Jesus meant by “the Kingdom of God”, but also things that required me to change some of the ways I viewed him.  I saw, for example, a Jesus who cared more about poverty and the people in it than I ever realized.  I encountered a Jesus I knew wanted me to love my enemies, but now was showing me that this was not a lofty ideal for the super spiritual but was, instead, a practical strategy of nonviolent resistance that anyone could use on their enemies at any time.  As I read through the words of Jesus each week, I was convicted but also comforted by the reality that Jesus is much more concerned about sending people out of the building than how many we could attract to enter it.  By the end of the sermon series, my soul was refreshed, my discipleship had deepened, my church had become more focused, and my words had become, “My Lord and my God!”

I guess I’m more like Thomas than I ever thought.  What about you?

Tags: lectionary, Revised Common Lectionary
← “Ever Been Rerouted?” from Easter Sunday
“The Witness of a Bonfire” sermon from Sunday →