If you watched any college football yesterday, then you saw one. If you didn’t see one then, you no doubt will see one today if you watch the Saints or the Cowboys or any other NFL team. You can tell who they are by the way they dance in the end zone, the hand motions they use in the face of other players, or the way they are followed by penalty flags. You will find them in the World Series and you will hear them from the microphones from the floors and hallways of Congress. They are the showboaters. They love to make sure everyone knows how good they are, usually while standing over the failure of someone along the way, someone still lying on the field. I actually saw one this past week at Jack’s high school Junior Varsity football game, as one of the players on the other team made a powerful tackle. It was a textbook tackle, but cheap, dirty, and late. The player showboated in front of his teammates, bringing no condemnation from his coaches or the refs. To those of us on the visitor’s side and probably even to many on the home side, it was poor sportsmanship and appalling. A self-exalter had done his showboating once again. These self-exalters are all around us, in our workplaces, our schools, and among our social circles. 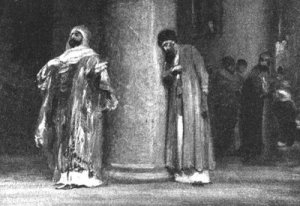 Jesus had a lot to say to the self-exalters of the world. One such statement he made for them was in our Gospel reading for today, Luke 18:9-14. We don’t usually have a built-in commentary of one of Jesus’ parables, but Luke provided one here with one Jesus told the crowd. He put the summary statement right up at the front, lest we happen to miss it, “He also told this parable to some who trusted in themselves that they were righteous and regarded others with contempt.” He either thinks that his readers are not quite bright enough to get Jesus’ stories, that they are not good listeners, or that they have such denial about the truth Jesus was teaching with it that they needed a pointed introduction first. Whatever the case, we, as listeners today, probably fall into one or all of those categories this morning, needing help to get beyond what may be one of our biggest blind sides.

Jesus, the best of story-tellers and one well acquainted with the condition of the human heart, began with a description of two men who were going up to the temple to pray. The first thing to note is that they both are accustomed to going to the Temple for prayer, being Jews, like Jesus, understanding the place of the Temple in their prayer life. The similarities these men share mostly end there. The Pharisee is one who has devoted his life to the law, doing all he can to make sure he is observing it in every facet of his life. His four statements about what he does are all in the language of every self-exalter–first person singular. He says, “God, I thank you that I am not like other people: thieves, rogues, adulterers, or even like this tax collector. I fast twice a week; I give a tenth of all my income.’ Maybe he was even doing an end zone style dance as he said all of these things. Jesus said God wasn’t impressed, as he didn’t go home justified.

The other man, the tax collector, is a man of faith, but has no list like the Pharisee’s to share with others and certainly not with God. The only things he can list are his sins, which are obviously weighing heavily upon his heart and soul as he enters the temple. There is no celebratory dance, no fist pumping, no working the crowd. His posture is one of contrition and brokenness before God. He knows who he is and he knows who God is. With that awareness, he humbles himself before God and asks for mercy. Jesus noted that he was the one who went home justified by God.

After getting the ear, and perhaps the ire, of his crowd with this story, Jesus added a powerful point of truth, as if anyone in the crowd thought this story had nothing to do with them. He wrapped up his story with this, “for all who exalt themselves will be humbled, but all who humble themselves will be exalted.” In other words, all who build their own righteousness and keep their noses in the air will be humbled, while those who recognized themselves for who they really are and approach God for salvation will be exalted.

As people who love to build ourselves up, we need to allow the truth of this story of Jesus to put a spotlight on what happens when we practice self-exaltation. The first thing we can see, if we take an honest look, is how we get a false view of ourselves. We, like the Pharisee, might actually have a great list of spiritual accomplishments. Have you referenced your list lately? Maybe you did on the way to church today, passing all of “those people” in your neighborhood who were sleeping their way to Hell, to the people who care more about working in their yard than in their soul, to your friends whose spirituality consists of hitting and then following around a little white ball on Sunday mornings. You would never do anything like any of that. You are in church, getting full approval of God. God also is impressed with your dedication to tithing, praying, reading the Bible, taking a Sabbath, and saying a prayer of thanksgiving before every meal (extra points go for when you do this or any of this in public before others who don’t do such things). Doing these things is not the problem. They are all good to do and have their place in our lives. The problem comes in thinking that doing these things is what makes us acceptable to God; that what God wants from us is what we do for Him. And the deceptive thought creeps in that you actually are good; that what you are doing is making you who you are. Any blessings, good health, promotions, riches coming your way are because God thinks you are good as you think you are. When this happens, you and I become as miserable looking as the Pharisee Jesus mentioned in his story. It is the tragedy of a life lived with a false sense of reality.

There is also a problem in thinking that we are what we do; that those who do not what we do like we do are not. To get to the place of exalting our own self-image, we do so by skewing our view of other people. We forget that we are made of the same stuff as they; that are noses are really no different than ours. Having to lift ours in the air is just our way of trying to make them different. We fall short of the glory of God every day just as much as the thieves, rogues, adulterers, and tax collectors of our time. Don’t we? Don’t you? When we seek to exalt ourselves above others by comparing our acts of righteousness with those of other people’s, we not only commit a sin of pride but we also transgress against God’s unconditional love and abundant grace for sinners like us. We not only fail to see them as God sees them, but our greatest sin may be in misusing our energy in puffing ourselves up rather than in building up our neighbor. We judge the criminals in our parish, yet we have not visited anyone in prison nor have we sought to make a difference with what tends to cause criminal activity in our community. We condemn the prostitute marketing her wares under the bridge downtown yet we do nothing to address the huge problem in our city with sex trafficking. We despise the rogue, yet we have never worked at a homeless shelter or in any programs to make homelessness disappear from our city. And what about our feelings for the “tax collectors” in our midst? Our disdain for them may be clouding our memory of how Jesus treated tax collectors, like Matthew and Zaccheaus, of his day.

Lewis Black has said, If you’re working out in front of a mirror and watching your muscles grow, your ego has reached a point where it is now eating itself. That’s why I believe there should be a psychiatrist at every health club, so that when they see you doing this, they will take you away for a little chat. (http://www.brainyquote.com/quotes/keywords/ego.html#hrbHPseKuQJogsbo.99 ) He’s right, isn’t he? Maybe there needs to be a psychiatrist at church as well, to help us when we get to the unhealthy point of watching our muscles grow, getting a false view of ourselves and of God.

A false view of yourself from exalting yourself leads to a false view and treatment of others. The biggest problem with self-exaltation, though, comes from the false sense of God we develop and perpetuate. Like the Pharisee who couldn’t beyond the height of his pile of good works and perfectly pious behavior, we become blinded when we get more focused on what we do for God. These stacks of righteousness get in our way of seeing the radiant bursts of the light of God’s revelation of grace. We become like the Pharisees in the story and crowd of Jesus that day, standing in front of the illuminating light God provided them in Jesus and yet unwilling to step into it. The Light of the World was shining down on them and yet they kept walking away from it. Their false view of God didn’t allow for a God who provided such grace for the sinner; who didn’t grade people the way they did. Before judging them, and thus becoming like them in so doing, let us recognize it doesn’t take much for us to get to a false view of God as well. We love to worship God, but a god of our own making, one who thinks and acts the way we want him to; one who fits nice and neatly within our own view. When we practice self-exaltation, we not only limit how much God can love others, but, even more, we restrict how much he can love us.

As I think about the showboating I saw on the high school football field last week, I can’t help but think what a teachable moment that could have been for the player and the team. He could have walked out on the field, huddled up the team, and told them how that kind of behavior isn’t acceptable; isn’t the way football is to be played. And I can’t help but think that is what Jesus is doing here, walking into a huddle of showboaters, letting us all know that life is to be lived with humility, not self-exaltation.