“Hope is a Verb” from Advent 1A

“It’s hopeless.”  “There’s no use even trying anymore.”  “It’s a lost cause.”  “He’s never going to change.”  “I’ll never make it.”  “We can never recover.”  These are all expressions of hopelessness, one’s we hear as well as one’s we might have said ourselves. They show up in our relationships, our families, while watching our favorite sports teams, in classrooms, around hospitals, in courtrooms, and prisons.  They are heard in churches, on political talk shows, and when peaceful treaties are attempted in places like Syria and Iran.  We say them to ourselves, to each other, and perhaps even to God.  We are all too familiar with them, as we can so easily embrace a glass half empty outlook on life.

With all that seems to be going wrong in our world, how can we not be a little hopeless? Year after year as we begin Advent with this word “hope,” we light a candle for it and with it adorn our Christmas cards. But, are we really seeing that there is much reason for it again this year?  If you were hoping for that raise or promotion at work and didn’t get it, you may be struggling with hope.  If you have had your dreams for a relationship turn into a nightmare, you might be wondering if there is any hope.  If you have an addiction you just can’t shake, you may have given up hope.  If you are living in the Philippines this holiday season, you may or may not think about hope in the same way.  If you are a parent whose only source of food for your children is food stamps, you may see hope in a different way if you were one of the many who were cut from the program.  If you keep up with the news, you may be concluding that things in our community are not getting better, but worse.  The ongoing reports of murder, drugs, and crime can lead us to question if hope isn’t just a church word, an empty dream and futile view of the future. 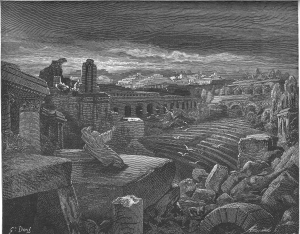 Challenges to hope are not a recent development.  As we have heard in our readings, Isaiah 2:1-5 and Matthew 24: 36-44, the light of hope has always had to contend with the darkness of despair. This was true for the people of Israel in Isaiah’s time.  They were surrounded by plenty of reasons to give up their hope.  They had been pursued, conquered, and captured by their enemies.  They had been humiliated by their defeat, torn from their homeland, and marched off into exile in a distant land.  All they had known and identified with as home was no more.  It even seemed at times that God was gone too.

There wasn’t much reason for hope until Isaiah showed up with a message from God. He had been spending some time listening to the God of Israel, receiving a message that would become a fire in his belly; a light in the darkness.  He had been instructed by God to give a message to the people that, “in days to come” things were going to be different.  In days to come their captivity would turn into freedom. In days to come, the injustice around them would come to justice.  The things wrong in their world would be made right.  The weapons of war would be turned to plowshares for peace. In days to come.  “Hang on,” he would tell them, “A new day is coming.”

In the meantime, they were to exercise their hope in the darkness by walking ahead in the light.  “O house of Jacob, come, let us walk in the light of the LORD!” he said to a hopeless people sitting in the dark.  It was not enough to pine for a better day.  According to Isaiah and Jesus in our Scripture today, hope is a verb.  Hope meant walking, working, believing, and actively waiting. God’s light had been given to them and it was still there, just ahead of them if they would keep on walking ahead.

Jesus provided hope, too, with his words to another generation of Israel who were in exile.  This time, they were at home, but under captivity to a foreign power.  After telling them what it will be like when the Son of Man fully arrives, he informed them that they should be ready, watching for him, as it could happen at any moment.  He said to them, “Keep awake therefore, for you do not know on what day your Lord is coming,” and “. . . “you also must be ready, for the Son of Man is coming at an unexpected hour.”  Jesus wanted to be sure they had a hope that was active; that was getting exercised on a daily basis.

An article about the effects of exercise in the New York Times appeared this week at a very strategic time, right as I was forking a piece of pecan pie and its heaping dollop of real whipped cream into my mouth.

Overeating and inactivity can each, on its own, produce an energy surplus. Together, their ill effects are exacerbated, often in a very short period of time. Earlier studies have found that even a few days of inactivity and overeating spark detrimental changes in previously healthy bodies.

Some of these experiments have also concluded that exercise blunts the ill effects of these behaviors, in large part, it has been assumed, by reducing the energy surplus. It burns some of the excess calories. But a few scientists have suspected that exercise might do more; it might have physiological effects that extend beyond just incinerating surplus energy.

“Energy Surplus” is a nice way of saying “fat.”  In other words, you are eating so much that your energy storage could supply electricity for the Western Hemisphere. I will tell you that I did finish my piece of pie, but it went down with a tinge of guilt.  If this is true, I thought, I must have one of the largest energy surplus’ in the world.  All I could think about was how much exercise  it would it take to burn off all of the overeating and inactivity I have been consuming.

So, how do we do this hope walking?  How does this happen for the church of today?  How can it happen for you as an individual, dealing with your own hopelessness and darkness?  The first thing we need to do is realize the current status of things.  Recognize the darkness for what it is. When we are living in captivity to things, we need to see our lack of freedom.  When injustice is in our world, we need to be aware of it.  When things are wrong in our community, we need not deny they exist. The church must not be reclusive, silent, or too heavenly to be any earthly good.  We must be familiar with the darkness of our times.

Let us not stop there, though. What we need to see is that there “are days to come.”  In our seemingly hopeless world, we need to claim the words of Isaiah for our time, fully believing that “in days to come . . .” things will be different.  We need to exercise our hope by imagining what those days will look like.  We need to think more about them, talk about how they will be, and encourage each other and our world with them. We need to paint them on canvas, put them to song, post them in social media, carry them to work, dream them with our children, put them in our prayers, and own them in our hearts.  The more we do so, the more light we shall see, the more we will see that we are walking in the right direction and participating in how God is bringing them to be.

Mark Twain understood hope and its need to be active.  He offered up a prayer that could be ours today, Lord save us all from a hope tree that has lost the faculty of putting out blossoms.(source) I’m not sure where Twain’s hope tree was located, but I’m confident that it would have needed the right amount of light.  The same is true with our hope.  We need to move it into the light, where it can be active and growing.  On this first Sunday of Advent, let us commit to embracing a hope in the one who has come and is coming; a hope that blossoms from the Light of the World, shining in our lives and for the lives God has put around us.

← How Do We Relate to a King?
“Choosing Bread for Thanksgiving” →