There is a right place for us to be in as followers of Jesus.  How are we to know that we are in it? One way to know is by seeing if it’s a place of humility.  This is what Jesus did one day when he arrived at a Pharisee’s house for a luncheon. Luke mentions that the man and other Pharisees were watching him closely.  He points out, however, that Jesus is watching them closely too.  As he watches, he observes how they and the other guests chose their seats and the power play of sitting at places of honor. Not one to let such an opportunity for correction pass him by, Jesus addresses their lack of humility with a parable. 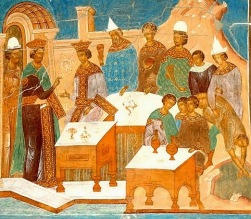 In the parable, Jesus describes a scenario of attending a wedding banquet and how it is wise to find the lowest place at the table rather than going to the table of honor. They would have been sitting not in chairs but on pillows or couches around tables.  The table in the center of the room was the table of honor, which is where everyone wanted to sit. Drawing from Proverbs 25:6-7, Jesus shares with them the wisdom that it would be better to be invited up to the table of honor than to be asked by the host to leave it to make room for someone else. In case they were still not getting the point, he says, “For all who exalt themselves will be humbled, and those who humble themselves will be exalted” (verse 11).

nce.  We may have trouble with this as well.  We are people just like they were.  People who struggle with selfishness, with self-exaltation, with a natural desire to have a sense of place, and with a desire to be recognized and honored by others for what we do. Surely we would have been caught jockeying for the best seats just like they were.  Like them, though, we are called to a better way in life.  We are given the pathway of wisdom by Jesus, who walks ahead of us on it.  It is the narrow pathway, one much less traveled than the other one we always see as we journey.  It is one of descent, leading us to less comfortable and less recognized places in our world. It is one that is at times lonely and quiet.  It is one with travelers who are often overlooked and unseen. This is the way of humility. This is the way of life for us as we follow Jesus.

Another way of knowing if we are in the right place is if it is characterized by selflessness.  Selflessness can go along with humility, but it doesn’t require it.  God, however, does.  The religious leaders who were striving for seats of honor at the luncheon didn’t appear to have it.  They were looking out for themselves, not each other.  They sure weren’t looking out for the people who weren’t invited to the luncheon. Jesus told them that those who exalt themselves will be humbled like the dinner guest who experiences the humiliation of having to get up and move down to the right seat.  Knowing they were watching him to judge his actions, Jesus warns them that their actions are being watched as well.

What does this place of selflessness look like for us?  If anything, it is motion.  Being selfless requires action. Selflessness is outwardly moving and incomplete unless it is for the benefit of someone or something else. We are most alive and most like God intended for us to be when we practice the self-giving, self-emptying actions of Jesus.  Living selflessly in our relationships means that we will be intentionally aware of the needs of the other person and be deliberate about honoring her or his needs above our own. Living selflessly in our church means that we will serve each other here in our church, giving our time to each other in conversation, providing genuine concern, offering of our gifts, and being present for one another in a time of need.

Living selflessly means not taking the last swallow of milk, not drinking the last cup of coffee without making more, not doing something for someone in order to be recognized, not dropping a name when you know that you could. It’s when you pay your fair share of the taxes, when you give credit when you could be taking it, when you rejoice when others are promoted and you aren’t. Selflessness is when you serve in the nursery and change diapers so the moms and dads can have a break for worship. Its when you take your grandkids so that your children can have a date, and maybe have a chance to make more grandchildren. Being selfless is passing the ball so that someone else can make the goal. Its serving the needs of our neighborhood in ways that benefit our neighbors, partnering with them in developing a healthy place to live and work.

Humility. Selflessness. Blessing.  These words don’t seem to fit together. Blessing just doesn’t seem compatible with humility and selflessness.  Maybe that’s why the world is so self-serving.  What difference would it make, though, to know that the humble and selfless are the ones who are blessed?  That’s what Jesus said would happen to whoever humbled himself.  Whoever takes a lower seat will be given a higher one.  The people who know and live in their place of humility will be exalted.

In addition to telling the parable, Jesus gave the host some advice. He told him to invite the poor, crippled, lame, and blind the next time he threw a party.  Hosting a dinner may be a show of hospitality, but inviting all of the people live in the margins and who never get invited anywhere is an act of selflessness.  Hosting a dinner for the elite and popular may bring favorable recognition; inviting and serving the people who could never repay you would bring true reward.  Here again, as we’ve seen throughout Luke’s gospel, Jesus speaks up for the poor, the powerless, the forgotten, the unclean, and the uninvited.  In doing so, he makes clear how God values them.

So there’s your seating guide.  Will you find your seat?