A Burning Bush and the Misery of a Flood

Message Manuscript for “Let My People Go”    Exodus 3:1-15
Delivered to Church for the Highlands
Sunday, September 3, 2017

Where is God when the floods come our way?  I wondered how people in the path of Hurricane Harvey asked and answered that question as it moved inland from Corpus Christi, sat on the Houston area for five days dumping 20 trillion gallons of rain, took at least 41 lives, created a $125 billion in damages, destroyed or damaged 185,149 homes, sent 42,399 people into shelters, left 120,000 people in Beaumont without water, and created other record-breaking numbers that are beyond comprehension.¹ As Jinny and I went to the Orange, TX area on Thursday, we encountered plenty of people whose homes and lives were in shambles. One woman who came to the rescue area where we were told me about her house but was even more distressed about her daughter’s brand new double-wide that was under water, full of the new furniture she had just purchased after saving for a year. I didn’t have the heart to ask if they had flood insurance. 80% of people in the Houston area don’t.  I’m sure people wondered where God was when news came out that one family lost six of its members in the flood.  Watching news coverage of the flood and seeing the distress, disorientation, and anxiety in the faces of the elderly who were rescued from flooded nursing homes might have led you to wonder if God was paying attention or aware.  Floodwaters, loss of everything you own, lack of water, and long gasoline lines have a way of making us question what God is—or isn’t—doing when the storms come.

The Hebrew people described in our text this morning must have had the same question in their minds.  Where is God?  Where is our help?  When will we be rescued from this oppression of our slavery here in Egypt?  How much longer can survive under these conditions?  What they found in the way of an answer is what we can find out as well. 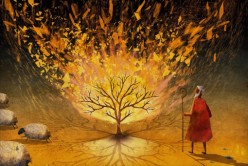 Moses found the answer in a burning bush.  We don’t get the idea that he was suffering much at the time, but his people sure were.  Moses had already demonstrated his willingness to defend them when he killed an Egyptian who was attacking one of them. As a result, he fled Egypt, went into the desert and herded sheep for forty years.  While there, no doubt in one of those moments when a person is overwhelmed with the loneliness of isolation and routine, Moses’ eyes were drawn to a glorious sight—a bush near him aflame with color.  His ears were then engaged with his sight as he heard a voice speaking to him from the bush. It was calling out his name, inviting him to come closer, giving its identity, and calling him into service.  Moses learned that the voice was God’s, speaking to him way out there in the desert, there in the bush.

I’ve included Elizabeth Barrett Browning’s memorable quote in the bulletin this morning because it is a beautiful reminder that encountering a burning bush is not an experience unique to Moses.  Burning bushes are all around us.  And what that means is that God is all around us, especially in the places, times, and circumstances we least expect God to be.  The burning bushes tell us, if we are paying attention to them, that God knows where we are in this world and that we are never so far away that God can’t show up there.  They tell us that God knows our name and calls us by it to come closer. Something is there for us to see, hear, and experience.

Moses did move in closer.  He took off his sandals and put his bare feet into the soil of holy ground.  And he heard God speak about what was happening to the Hebrew people in their slavery.  Moses heard God speak out of an awareness of the suffering and misery they were experiencing; that God heard their cries and would bring justice on their oppressors.  God also told Moses that he would be the one to deliver them from it all and lead them out of it.  In case Moses might wonder where God was as he headed back to Egypt, God assured him that He was with him and would be with him in the future.

As we move closer to the burning bushes in our lives, we too hear where God is.  Just as God heard the cries of the Hebrew people in Egypt, so God hears the cries of people who are in misery today.  God is paying attention and aware of the flooding waters and the damage they bring into our lives.  God knows it when we suffer mistreatment from people in power over us, to our enslavement to the things that have captured us and won’t let go.  God is aware of the injustice to black men who get profiled by police while driving. God is not deaf to the cries of innocent people who are incarcerated, to transgender soldiers who defend our country, to workers whose wages aren’t enough to feed their family. We are to know that God is aware of what’s going on with us.

What Moses learned next was that God was not only in the burning bush; God was in him.  God spoke through the bush to call him into service.  Moses was to be God’s spokesperson and deliverer.  God would be in Moses’s words as he went to tell Pharaoh, “Let my people go!” God would be in Moses’s steps as he led the Hebrew people out of their oppression and into freedom.  God had been in the future of Moses and the Hebrews, was currently in their present and would be in their future.

Today, we are to hear that God is in us as well.  In a way, we are the answer to our question about where God is in all of the sufferings in our world.  God is right here in you and in me, calling us to do something about it.  In what ways will we be God’s presence in the aftermath of Harvey? And what about right here in our neighborhood, hearing God’s call for us to do something about the escalating crime and shootings, about the children and adults enslaved in sex trafficking, the selling of crack and meth on our street corners and alleyways, and the predatory practices of payday loan businesses?  And how about in our state and nation where our institutions and monuments remind us that equality is still not a reality for all, where the gap between rich and poor expands, and where dreamers are in danger? There are so many other things to mention here and it all can be overwhelming.

If God has called us to be the answer to our question, where even do we start?  Moses’ response to God is a great place: “Here I am.”

← Aren’t We to Be Nonconformists?
Putting on Jesus →