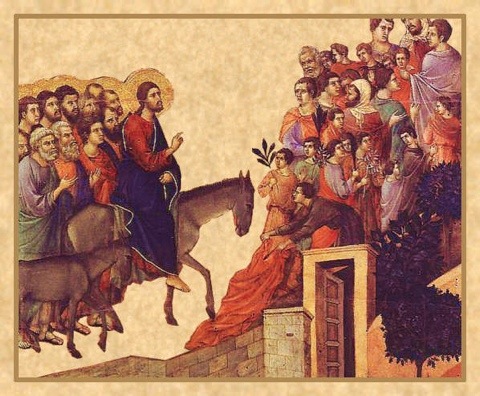 Delivered to Church for the Highlands
Palm Sunday, April 1, 2012

[Video Clip of Moonbot Studios Oscar Parade in Shreveport].
You can tell by the look on the people’s faces and from the pomp and circumstance of the parade that the people of Shreveport-Bossier were both excited and proud at this parade. The City threw it to honor William Joyce, Brandon Oldenburg, Lampton Enochs and others at Moonbot for their Oscar win. It was a special time to celebrate with the group, each one who had done so much for our community through their creative energy.

The Gospel we just heard was about another parade, one thrown at the east side of Jerusalem with Jesus on a donkey. It was much the same, with people lining the streets, celebrating Jesus for what he had done for them and the community; but also for what he would be doing in the future. Seeing this parade of long ago leads us to some questions to ask each other and ourselves on this Palm Sunday.

Why do you celebrate Jesus? Is he really your “Hosanna”? Many of the people who gathered on the parade lines of that day cheered him on as the one to come and save them from their sins; from the oppression of captivity; out of the depression of their existence. They were getting to see the fulfillment of everything their parents, grandparents, great grandparents and previous generations had longed for with great anticipation. The “Hosanna” they shouted burst from them like oil struck at a well. It had been there underneath for ages, but that well was now gushing the grace of God for the salvation of humankind.

Palm Sunday invites us to join in with the people on this parade route to shout “Hosanna!” as well. It comes as we recognize that he is everything we have been looking for as well. Isn’t he? He is all that we have needed, expected, planned, and hoped for. He is the one who has come to heal our diseases, touch our brokenness, break our shackles, forgive our sins, absorb our tears, exorcise our demons, and calm our waters. I think much of this was in their minds as they shouted “Hosanna” that day. Are these Hosanna characteristics on our minds today as we say the same word? If we aren’t careful, we might just join in with the crowd and shout a word we don’t fully understand. We might miss the real significance of what this Jesus has done and what he is yet to do. What a great week ahead of us to see our Hosanna.

A second question for Palm Sunday: Is Jesus your king? Marcus Borg (The Last Week, Marcus Borg, p. 4) has written that he believes there is evidence that Pilate entered into Jerusalem with his army on the same day Jesus entered. He believes Jesus planned out his own entrance on the east side, coming into town in contrast to Pilate’s westward entry. Pilate rode a horse, demanded allegiance, and had a show of force with an army. Jesus, however, rode in on a borrowed donkey over the worn out clothes of the poor, showing compassion and humility rather than force and pride. An article in Homiletics stated, “It’s instructive to try a few Palm Sunday terms on Google Trends. For “king” vs. “servant” — “king” wins every time. “Horse” has it all over “donkey.” Or, try “war” vs. “peace” — there’s more buzz about war than peace, on both the Internet in general and in news stories. Some things never change. ” (Homiletics: Animating Illustrations, April 5, 2009) But these people recognized Jesus as their king. He was their kind of king. His news was truly good news. His methods were strong, yet loving and compassionate. His voice was their voice. His hands and feet were those of God. I can’t say for sure, but I’m confident many of these parade spectators would later be among those Christians who refused to pay homage to Caesar or anyone other than their King Jesus.

Is he your king? Or are you looking elsewhere, at someone whom everyone else thinks deserves attention and cheers? There are kings who enter our towns and our lives who promise the world, but deliver further captivity. It may be our jobs, our finances, our political favorite who becomes our king. It may even be the Megamillion lottery this Tuesday night (900 million now?). We look to all of these things to provide us with what we long for the most, when they can only give us what we need the least. Jesus offers to us real life, clear purpose, and a place in his royal family.

A third question for Palm Sunday: Is Jesus your future? As Jesus entered into town, the people there with palm branches in hand saw him as their future. Everything they saw him do and heard him say gave them every reason to believe in the future; that better days were ahead. It caused them to look at their captivity, their failures, and their dreary existence in a whole new light. What seemed to have become a reality of hopelessness as the sun was setting on their lives as people of God was now turning into a dawning of a new future; a new reality. No wonder they cheered.

Does your future depend on him? This past weekend at the Cooperative Baptist Fellowship Spring Conference, Rick Bennett, Director of Missional Congregations, was the guest speaker. He talked about the creative imagination of Jesus; the vision for a better future maintained at all times. He said churches need to lean into that vision. Individuals, like you and me, need to lean into it as well. Is he your future? As you see him go by in this palm parade this morning via borrowed donkey, do you see your future passing by? If so, have you joined in right behind him, to go where he is going? The call goes out to us on this Palm Sunday to make sure Jesus is our future, not just someone who did something for us in the past.

The excitement of the Moonbot Oscar parade was not just about celebrating what happened as much as it was about what is yet to happen. It provided a glimpse into a promising future of films made right here in Shreveport. And the excitement about the parade Jesus rode in long ago drew cheers not just about what Jesus had done already, but what they hoped he would do in the future with this one they called “Hosanna.” As we enter Holy Week today, we cheer on what Jesus did for us, but also for what he is yet to do. “Hosanna!”

← 5 Favorite iphone Apps for Preaching
A Word for All Mourners →