Do You Have a Batcave?

We’ve been showing old tv shows and cartoons on Thursday nights to the Highland Blessing Dinner crowd here in the chapel before the meal starts.  The most requests are for Three Stooges episodes, but the crowd has enjoyed the Flintstones, Looney Toons, and Batman (the original ones with Adam West).  In one of the Batman shows, Batman and Robin escaped to the Batcave from the chaos in Gotham.  I had forgotten how the Batcave just blends right in with its surroundings until Batman flips a switch in the Batmobile and stealthily enters. It is in there, behind the walls of their hideout that the dynamic duo is able to regroup and plan their next move against the villain of the week. Watching the show reminded me how cool I once thought it would have a Batcave of my own.  Have you ever had a hideout? A place where you can go and no one can locate you; where you can get away from it all and gather yourself back together?

John describes the disciple’s hideout in the text we have heard this morning.  This is a seemingly safe place for the disciples to go.  They are in fear of the officials identifying them as followers of Jesus and arresting them.  They are afraid that the violent death of Jesus could be what happens to them as well.  They are afraid of the reports the women and Peter and others have been giving that Jesus has risen from the dead.  They are afraid, so they find a hideout, a place with walls and door they can secure to keep anyone from coming in. 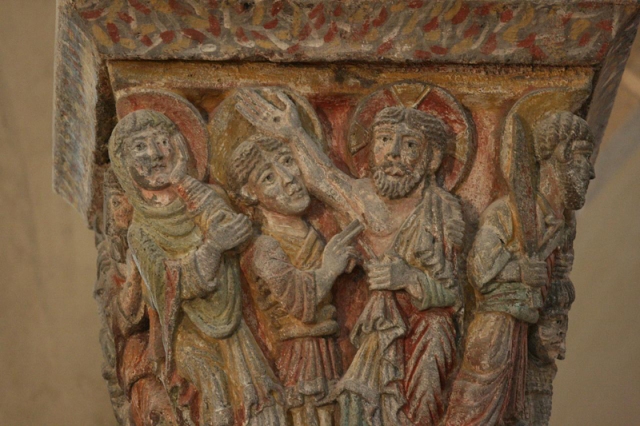 Jesus, though, is not just anyone.  He more than anyone wants to come in to be with them, even as they are behind the walls.  Walls mean nothing to Jesus.  They never had. Jesus had seen his share of them and was always able to shake them until they fell.  Now he, as risen, was walking through them, as though they were nothing to him. They might have been nothing to him, but at this point, they—these walls–were everything to his followers.  All they could think to do as their world crumbled was to find some walls to hid behind.

As Jesus walked right through them, he greeted them with peace to disarm their fear and then showed them his hands and his side to stoke their diminishing belief.  He doesn’t beat around the bush about why he’s there; he says to them, “As the Father has sent me, so I send you.” That seems strange, doesn’t it?  You would think there would be so many other things someone who had just been executed by crucifixion, died, and then came back to life would have to say.  But Jesus picks the most important message for them:  get out of this room and get out there where God’s work is to be done!  That’s how and why God sent me into this world, so now I am sending you out of here in the same way.  And he breathed on them the Holy Spirit, to guide them on their way.

I ask you again, do you have a hideout?  Don’t we all have walls we find or build ourselves that give us some sense of security from the anxiety we experience in the world?  I’m pretty sure the answer is yes.  Chances are you are behind some right now. All of this talk of Jesus about service, forgiveness, justice, and seeking first the kingdom of God is just enough to cause you to duck and cover; to create a buffer to give you retreat and allow you to gather yourself.  Giving your life completely to God is scary and threatens everything you want to keep and do for yourself.  It could even get you in trouble with “the authorities.”  And so we find or create walls.  Some of our walls are ones that have been there a long time, one’s other people have left behind, like fear, tradition, prejudice, a drug or a bottle, a person, a religion, privacy, or a job.

Have you heard the poem, “I Build Walls?”

Churches build walls too.  In fact, they are quite good at it, with a long history of building walls to keep the wrong people out and the right people in.  The irony is that Jesus fits in better with the wrong people than the right people.  And this is why he comes through our silly walls and shakes us up a bit when we lose sight of the fact that we don’t belong with them.  He says to us as he said to them in their walls, “As the Father has sent me, so I send you.”  Jesus tells us that there is no place for us there, behind walls, because the need for love, reconciliation, healing, justice, and peace is outside our walls; out there.  I like what John Lewis says about church during the civil rights movement, “It was not enough to come and listen to a great sermon or message every Sunday morning and be confined to those four walls and those four corners. You had to get out and do something.”[i]  Jesus never intended for the church to have walls.

Church for the Highlands started as a church without walls, which is why we place such a great emphasis on our Missional Ministry Teams.  As the first part of our purpose statement reads, “We exist to bless the Highland neighborhood with the love of Jesus . . . “ We can’t do that in here.  Jesus won’t let us get comfortable in here Jesus enters in and sends us out, just as God sent him.  He directs our attention to the world out there where we can live out what he has put in; where we can join with what God is already doing out there in the lives of people who may never come in here.  He sends us out to bring healing to the sick, comfort for the grieving, hope for the hopeless, forgiveness for the sinner, redemption for those who are lost, justice for the oppressed, love for the unloved, clothes for the unclothed, and food for the hungry. The one who rose from the dead, who could have talked about anything, decided to say just one thing: “So I send you.”

So, where is Jesus sending you?