I was painfully reminded yesterday of the truth of John Steinbeck’s words, “It has always been my private conviction that any man who pits his intelligence against a fish and loses has it coming.” This came to me while Jack and I fished on Toledo Bend in a high school bass fishing tournament. It was a tough day on the water for humans. The fish did just fine.

That is the kind of fishing day the disciples were having as described in John’s Gospel this morning. They were fishermen and probably had fished these waters since they were children.  Surely they knew where the fish were biting and had discussed the best place to throw their nets on this day. And you know they were telling stories of fishing here before, with the usual lore and myth that happens when guys talk about fishing.  They must have been somewhat rusty with their skills, not having fished much or at all since they dropped their nets and began to follow Jesus when he called them to be his followers.  Even still, fishing is what they knew best and so they returned to it when Jesus died.  As with any fishing trip, someone would have to make a supply run. They would have to find those nets they dropped, locate a boat, get snacks, check the weather report, and all of the other things that go with a day on the lake.  This was so different from the kinds of trips they took with Jesus, but those days were gone, so they thought.  You can imagine how excited they must have been to get away from the problems of life and do something they knew so well.

Their excitement, though, soon turned into disappointment.  It’s that feeling anyone who fishes knows all too well.  The lake is full of fish and none have made their way into the boat.  The hope that goes with every cast begins to lessen and, as the day goes along, discouragement sets in. The cheerful birds that greeted you at dawn now seem to be mocking you with their chatter. The disciples must have felt like failures out there, with this disappointment added to the long list of others they had experienced since Jesus entered Jerusalem on that donkey and to cheers of the crowd and the waving of palm branches. This had been the worst week of their lives. They were grief-stricken, confused, discouraged, and adrift. Fishing wouldn’t fix all of what had happened, but it sure would help.  The disappointment wasn’t just about fishing. Peter knew that.

Have you ever felt like these disciples?  Do you know what it is like to have the precious things of your life crumble before your very eyes? Do you know how it feels to have the flame of your hope snuffed out suddenly and leave you in the dark about the future?  Surely you must.  If you are human, you know how brutal life can be; how quickly things can change and leave you like those disciples, unable to make anything go right.  On days like these, we even wonder if we should keep on casting our nets, reasoning with Einstein that it is insane to keep doing the same thing over and over and expecting different results.  Yes, I’m pretty sure we all know what it is like to have a bad fishing day.

Something happened to change how the disciples were feeling about their crappy (yes, there’s a pun there) day.  I think it must have come right as the disciples were about to devour each other out there in that boat.  Days like theirs are enough to make the best of fishing friends turn on one another with blame, irritation, and insult. It is then that they hear someone from the shore telling them something.  What?  What did he say?  Who is that guy?  Who does he think he is, standing over there on the shore telling us how to fish!  Great. That’s all we need now is unsolicited advice about trying the other side of the boat with their net.  Either out of desperation or just to prove the guy wrong, they decided to do it.  They threw the net on the right side of the boat and suddenly caught more fish than they could handle in the boat, 153 in all.  As soon as Peter saw the net fill, he recognized that only Jesus would say and do something like that.  One of them shouts out to the others, “It is the Lord,” causing Peter to leap up, put on his clothes (wait . . . was he fishing naked?), and dive into the water to swim to Jesus. Jesus was right.  Right about it all.  Right in their midst.  Everything changed when Jesus showed up. 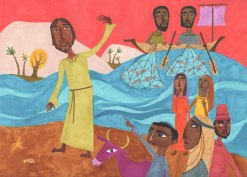 Isn’t that a great truth for us to consider here this morning?  Everything about our day changes when we hear from Jesus and see him standing in our midst, even when we are at our worst.  Maybe at first it is hard to listen while you are in such despair and discouragement that you can hardly see straight.  But then you hear a voice that sounds familiar, one that typically goes against common sense of the day yet one, when you think about it, has never proved wrong before.  The resurrected Jesus speaks into the frustrations of our lives and gives us a better way of doing things than we think is right.  He doesn’t laugh at us for doing it our way; he just offers a better way, one that will change everything for us when we try it.

← Do You Have a Batcave?
“A Good Shepherd for Ewe”sermon from Sunday →